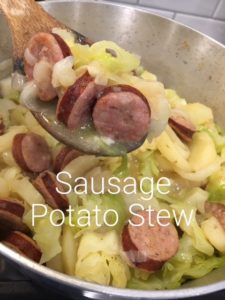 It is a meal that I learned how to cook from my mom. She cooks a version of this and it is the ultimate comfort food.

I would cook it in college and eat off of it for a week.

The cabbage truly takes the dish to another level.

Today I decided to try a new smoked sausage. 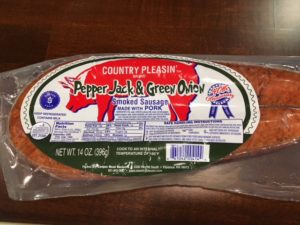 It was a pepper jack and green onion smoked sausage and it was pretty good!

I’m usually a Savoie’s girl but I like to change it up sometimes! 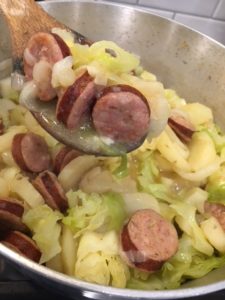 Here is the recipe for the sausage potato stew.

2 lbs. russet potatoes, peeled and sliced thinly (slice thin for them to cook quicker or larger if you aren’t in a rush to feed 2 hungry children)

salt and pepper to taste

In a large magnalite, brown the sausage in a little olive oil until the sausage starts to have some color.

Add the onion and garlic and cook until onion softens.

Add potatoes and chicken broth.  Season with salt and pepper. Bring to a low simmer and place the lid on. Cook until potatoes are almost tender.

Place butter on top of the potatoes and add cabbage to the pot. Stir to combine and place the lid on to finish cooking the cabbage.

Cabbage does not take a while to cook. When cabbage is desired texture Season with salt, pepper, and Cajun seasoning to taste.