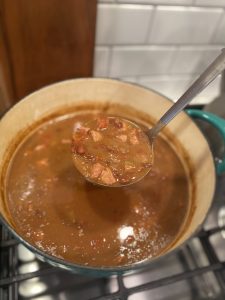 With fall approaching, I can’t think of a better dish to post about.

The first time I ever heard of red bean gumbo was about 2 years ago from one of my patients.

The second time I heard about red bean gumbo was about 6 months ago. My mom  & dad went to a dinner party and it was served there.

Both recipes were similar, so I decided to combine the two and see how it tasted.

For those of you who haven’t heard of red bean gumbo, it is exactly what it is called.

It is a combination of red beans and gumbo. It is a creamy, red bean mixture that has a roux flavor like gumbo.

This works great for a crowd. It also freezes well! 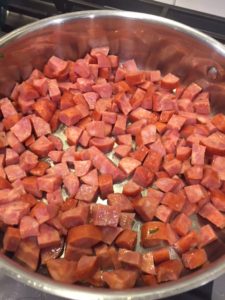 In a skillet, brown the sausage in a little bit of olive oil. When it gets golden brown, remove from the pot and set aside on a plate. 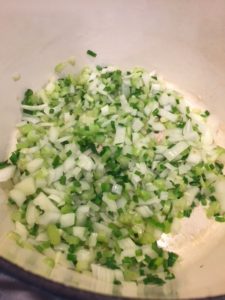 In a large pot over medium heat, sauté the veggies (onion, garlic, celery, green onion) in a little olive oil until tender. (about 15 minutes or so) Season with salt and pepper. 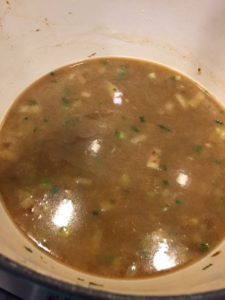 Add the sausage back to the pot.

Stir and bring to a low simmer. Adjust seasonings accordingly. Cook for about an hour at a low simmer, stirring frequently. 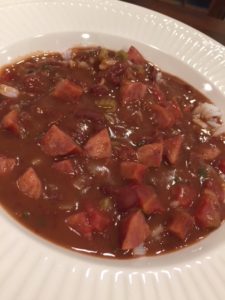 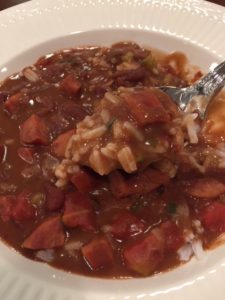 1 can cream of mushroom soup

salt and pepper to taste

In a skillet over medium heat, brown sausage in a little olive oil until it gets a little brown. Remove from pot and place on a plate.

In a large pot over medium heat, sauté the onion, garlic, celery, green onion in a little olive oil.

Saute until veggies are tender, about 15-20 minutes. Season with salt and pepper.

Next, add roux to veggies and stir around while pouring in the chicken broth. Continue to stir until roux dissolves in broth.

Add the sausage, cans of beans, mushroom soup, and rotel and give it a good stir.

Bring to a low simmer and cook for about an hour, stirring frequently.

Adjust seasonings. ( I don’t like giving measurements for salt because different sausages have different levels of saltiness).

Serve over rice. Garnish with more green onions if you like.